The platform below was custom made by the Illinois Watch Company and used on the first experimental movements, which they also made.  The platform has 11-jewels and uses a high grade 16 size Illinois balance.  This platform is #39 and was installed on movement #27.  Note the hand damascening.

The picture below shows the high-grade 11-Jewel Illinois platform, which uses a 16 size balance assembly.  This platform was used on all Sangamo production clocks until late 1927 when Sangamo introduced a second line of less expensive 7-Jewel clocks.  The photo on the far left shows the platform with it’s clear cover, which was used on clocks with the visible escapement dials.

The platform pictured below was originally part of the Salesman’s Sample Box (see Sangamo “Stuff”).  It is marked “Swiss Made” and has only 7-jewels and would be much less expensive than an 11-Jewel Illinois platform.  Some clocks have been found with this platform, however, they are very rare.  It is speculated that this was Sangamo’s first 7-jewel application, as it was part of the Salesman’s Sample kit.  Most likely the performance of this platform was not up to Sangamo standards and it was replaced with the round 7-jewel Illinois platform.

This is the round 7-jewel Illinois platform found on most early Sangamo 7-jewel clocks.  It uses a high grade Illinois 16-Size balance, however, is not damasked and lacks the general finish of the 11-jewel model.  This platform was interchangeable with an 11-jewel model and utilized the same mounting surface.

The photo below shows an oval 7-jewel Illinois and then later Hamilton platforms.  It is speculated that the design of the platform was changed from round to oval, as a way to prevent enterprising Jewelers from buying a less expensive 7-jewel series clock, installing an 11-jewel platform and the selling the clock for an 11-jewel price (almost double a 7-jewel). 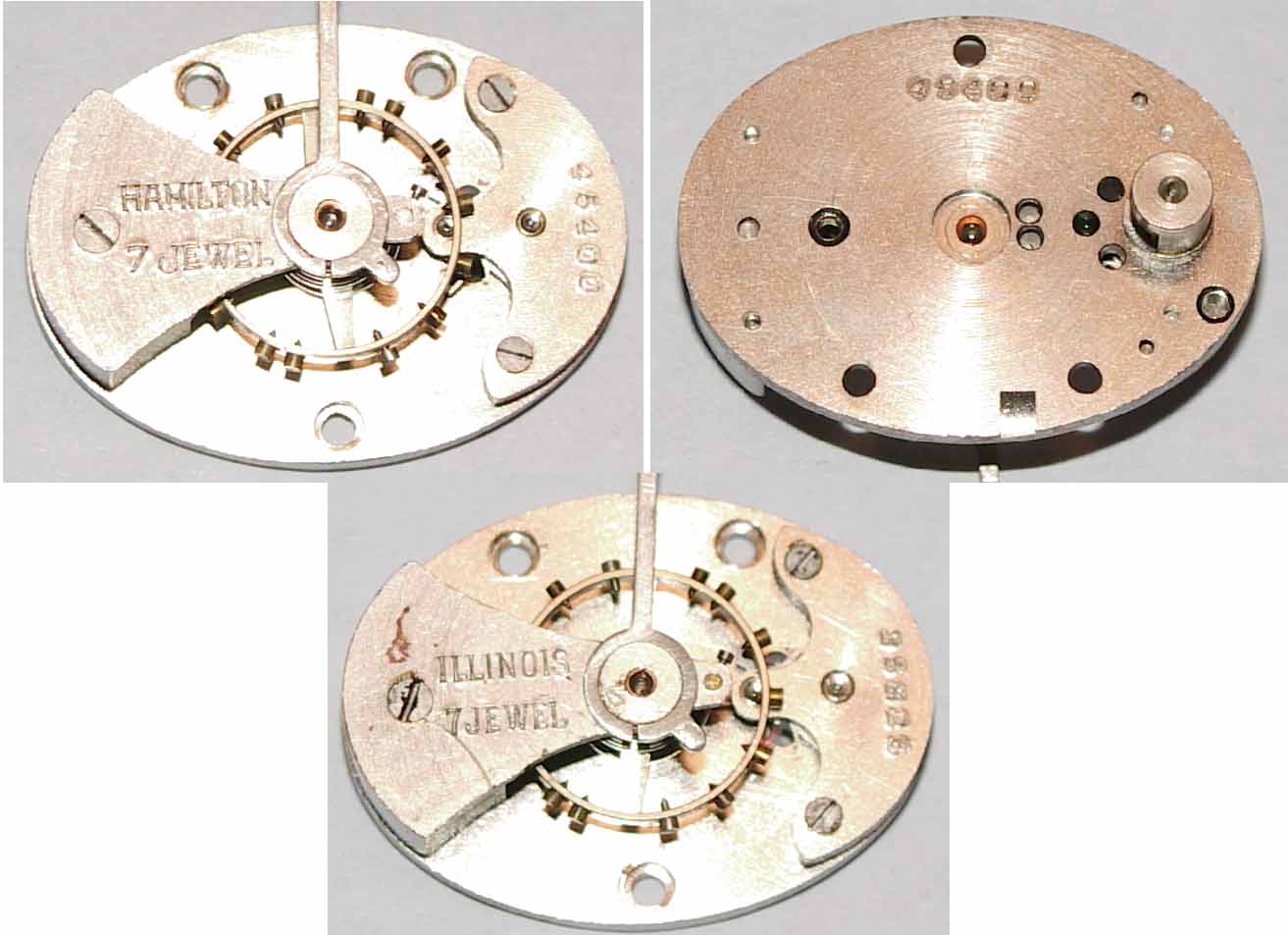 Late in the production of electrically wound clocks a chronometer adjustment was added to the platforms.  This made it possible for much finer adjustments to the balance than the old “lever” system. 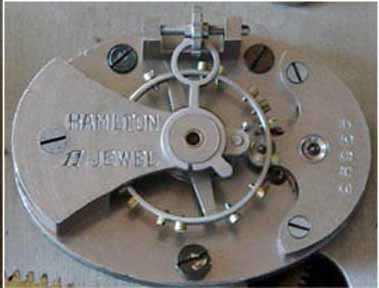 Shown below is a rare 11-jewel Hamilton platform, which is beautifully finished and highly damasked.  This platform was installed on a Jeweler’s Regulator movement (Type-C) with sub-seconds hand and is considered one of the best platform every used on a Sangamo movement.  (photo courtesy of Ken Kerr) 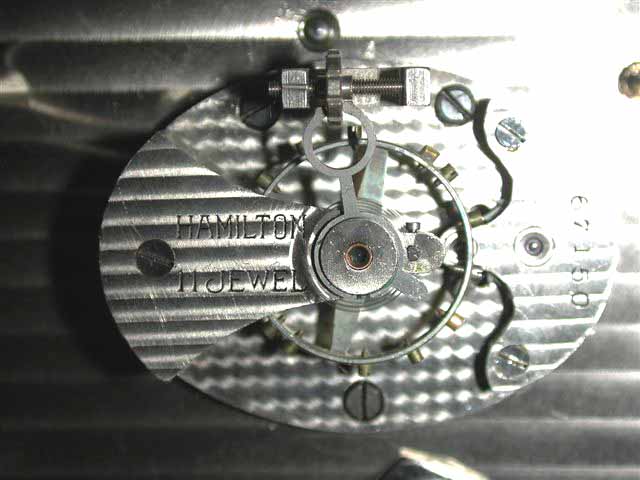 The photo on the top is of 2 different balance cocks that can be found on Sangamo clocks.  The far left cock is off an oval Illinois platform, but note what was a “7-Jewel” platform has now been over stamped with “11-Jewel”.  If you look closely you can see the outline of the old “7”.  The other balance clock is off an oval Hamilton 11-jewel platform and in this example you can see that the “11” has not been over stamped.  The  bottom photo is of a Hamilton platform that has been converted from a 7-jewel to an 11-jewel by over stamping the “7” with “11” and adding jewels to the pallet fork and escape wheel pivots.  It is speculated that this was done when Sangamo ran out of their stock of round 11-jewel Illinois platforms, but still had demand for 11-jewel business.  As such it would have been necessary for Hamilton to produce these platforms and it appears that to address demand quickly, they took completed platforms off the shelf and converted them.

The pictures below are of an Elgin E-1 platform (top) and a Hamilton H-34 platform (bottom).  These platforms were likely manufactured in the 1940’s and can be found on the Sangamo Contactor Unit (see Sangamo Stuff Section for picture) and have also been found on some of the last production of electrically wound clocks (can be used to replace oval platforms) and mechanical timers.  These are all high grade 11-jewel platforms, however, were made in both clockwise and counterclockwise rotating escapements.  Clockwise rotating escapements are used in Contactor Units, whereas all Sangamo clocks (except the early experimental model) have platforms which rotate counterclockwise.   It is all but impossible to convert one to counterclockwise rotation (believe me….. I have done it), but these are exceptional running platforms.  It should also be noted that the escape wheel pinions are “9” leaves on these platforms, where Sangamo, Hamilton and Illinois escape wheels have “10” leaves.  Subsequently, these platforms beat at 17,000 BPH versus the typical Sangamo platform at 16,200 BPH. 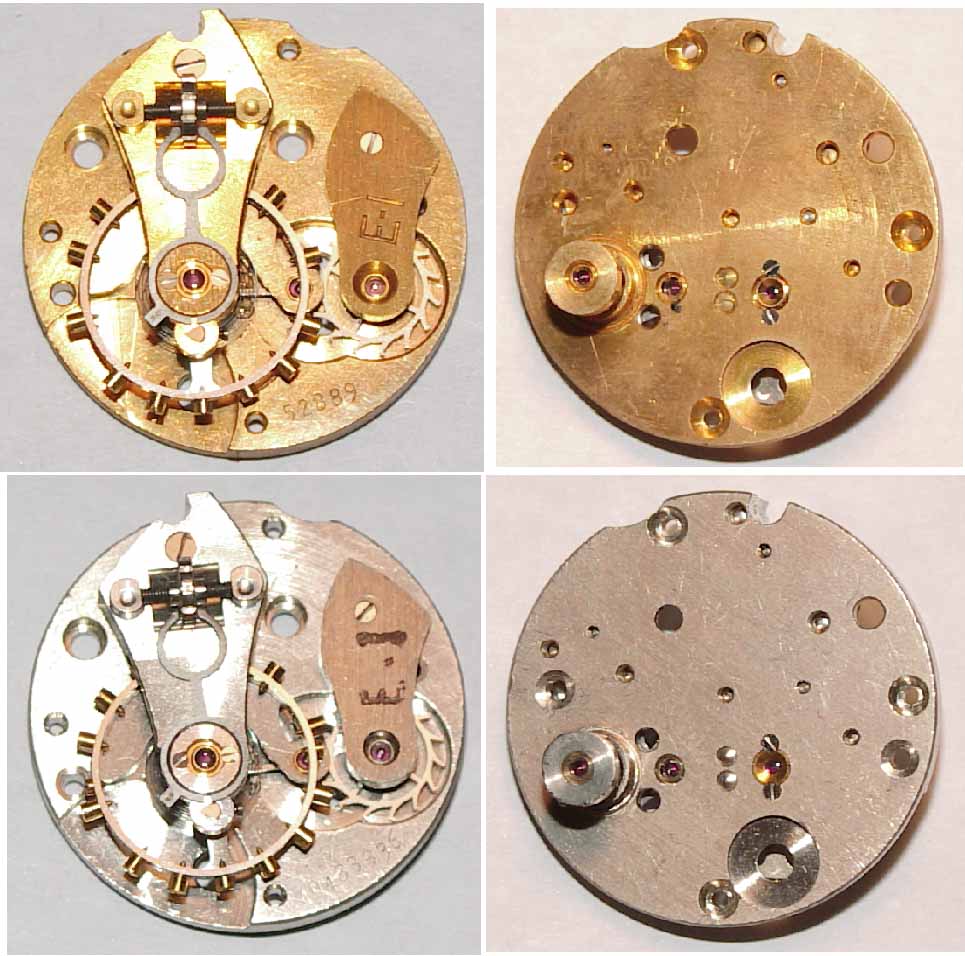