To make identification of Sangamo clocks easier, we have separated them into two different categories, Electrically Wound and Synchronous.

Synchronous clocks can be easily identified by the fact that there is always some type of indicator that shows “seconds” on the dial.  This is either a “seconds hand” or a “seconds floating disc.  The example top example below shows the “floating disc” in the center of the dial.  The bottom shows a separate hand. 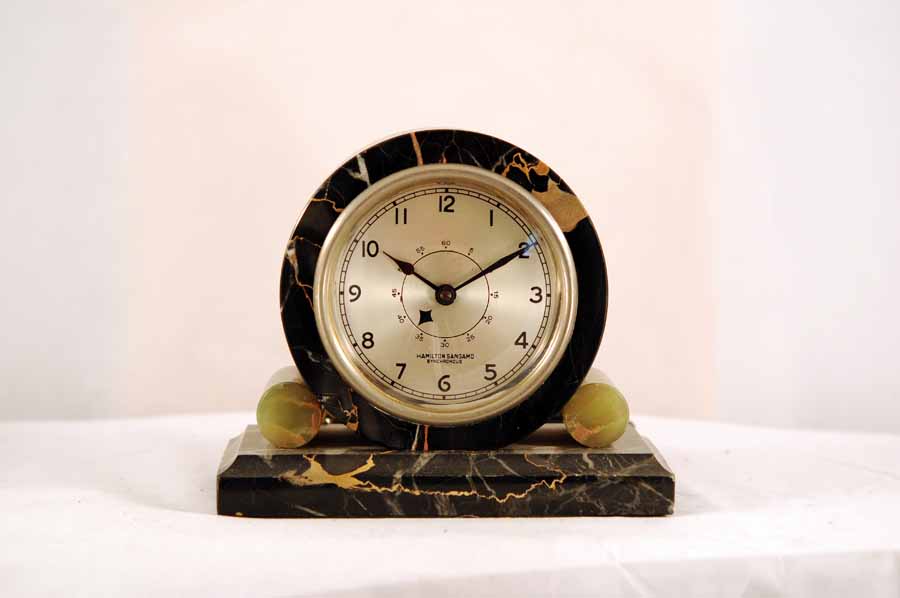 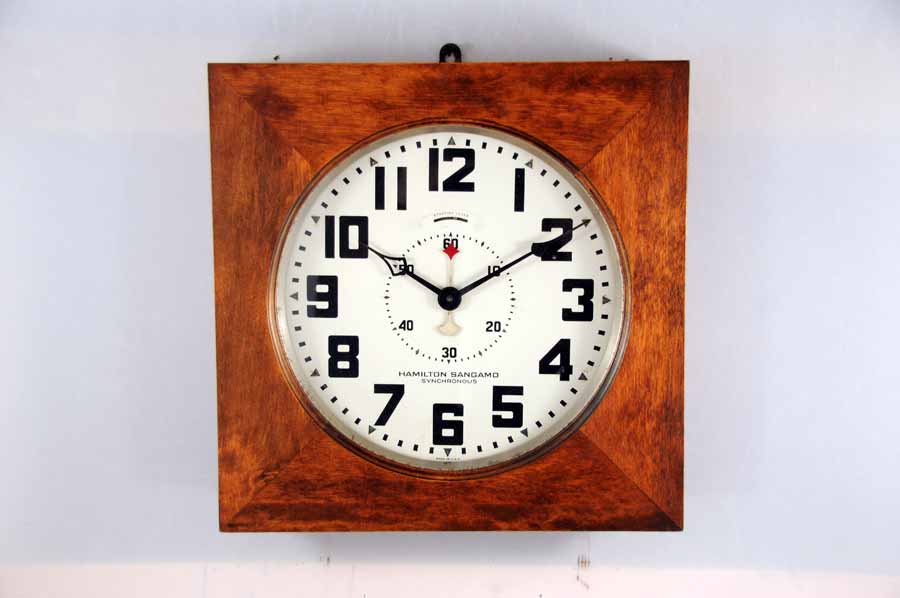 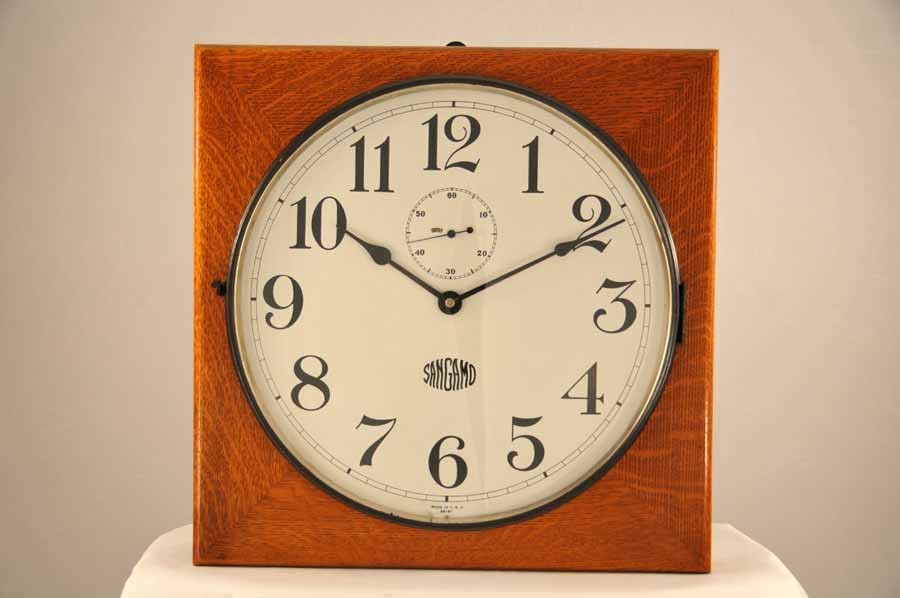 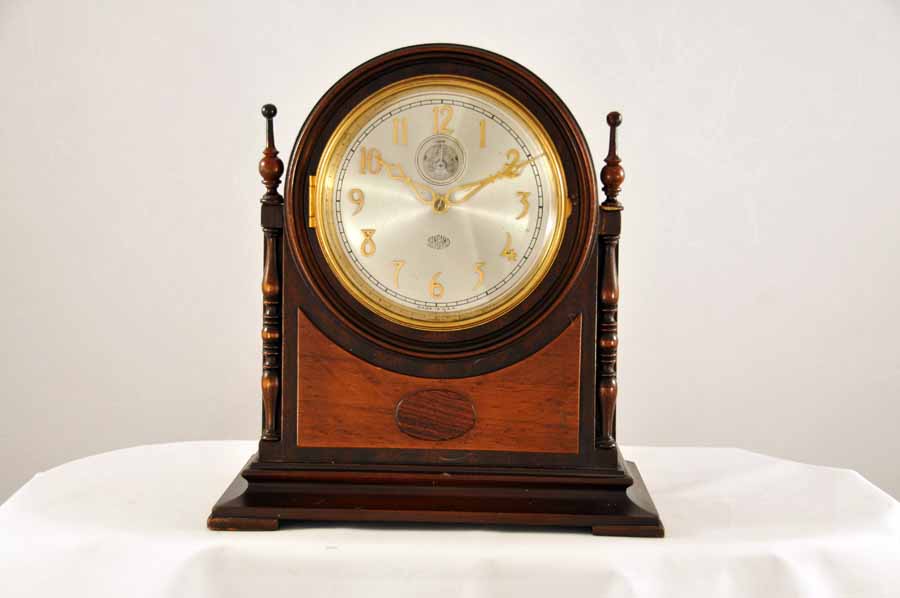 Shown below are examples of the various ID Tags you will find on Sangamo clocks.  The top section covers Synchronous tags and the bottom section shows tags for Electrically Wound examples.  The information on these tags will give you a vast array of information about the clock “if” you know how to read them.  The notes above each tag will help teach you how to do exactly that.

We can assign an approximate date of production by using the following facts.

Although we do know that Sangamo kept exact records of production dates and serial numbers, none of this information is known to have survived.  Furthermore, no records from either the Illinois Watch Company or Hamilton Watch Company related to platform production have been located.

Using the information above you can estimate that the clock whose tag is shown directly below was made between August of 1930 and April of 1931, the 9-month period that the Hamilton-Sangamo Corporation were making Synchronous clocks.   You can deduce this by the fact that the Headquarter city for the Hamilton Watch Company (Lancaster, Penna) and for the Sangamo Electric Company (Springfield, ILL) are listed at the bottom of the tag.  Note also that this clock operated on 110-125 Volts and 60 Cycles.  Since Sangamo made synchronous motors for different currents and frequencies, close attention must be paid to this information. ** Also note the Style Number for this clock is “S-405”, which is a small tambour model. 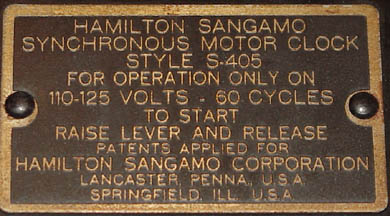 The clock for the tag below was made during the same 9-month time period, however, we wanted to show you an example of a tag with different current and frequency requirements.  This clock has a motor which was made to operate on 110 VAC and “50 Cycles” instead of 60 Cycles.  If connected to a power outlet today (110VAC, 60 Cycles) this clock would run FAST.  It is possible to replace the motor with a 60 Cycle version, however, these motors have become increasingly hard to find.

The clock for the tag below was made after May 15, 1931, during the time that GTI was still making Sangamo clocks in Springfield, ILL.  The tag no longer has the Hamilton Corporate Headquarters city/state information listed, which would have been removed after the sale.  It is believed that GTI continued to manufacture clocks in Springfield for several months to deplete “Hamilton-Sangamo” parts, however, no exact date for the relocation of production to Thomaston, Conn has been confirmed.  Dials on these clocks were no longer marked Hamilton-Sangamo, but just the word “Sangamo” in block lettering. 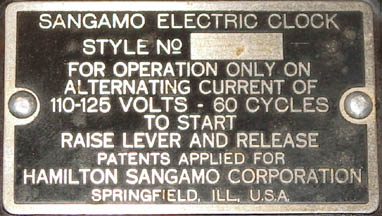 Clocks with the tag shown below are actually Sangamo in name only.  At this point GTI had relocated all production to Thomaston, CONN and began using new and different case styles of their own design.  These clocks continued to use dials with the block “Sangamo” name and center rotating seconds disc.  Notice that the Hamilton-Sangamo Corporation is no longer listed and that Thomaston, CONN is now stamped in the tag.  These clocks only have the name “Sangamo” in block letters on the dial. 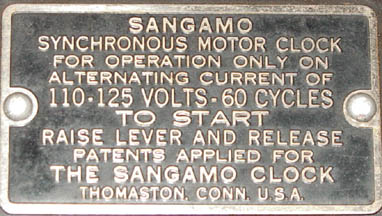 The clock for the tag below was originally sold and used in England.  It has a standard Hamilton-Sangamo movement, but with a different motor to operate on 200/250 volts and 50 Cycles.  Most likely all the parts were imported to England and the clock was then assembled by British Sangamo, who was a subsidiary of The Sangamo Electric Company.   The dial has the block “Sangamo” name stamped onto it and uses the rotating center seconds disc.  No firm information has been found to document clocks distributed by British Sangamo.

Electrically wound clocks were the first clocks manufactured by The Sangamo Electric Company and what started their venture into the clock making business.   Clock production began in the Spring of 1926 and the first clocks manufactured for sale to the public were time-only (Type “A”), with time and strike models (Type “B”) made available a short time later.   Early time-only clocks can be identified by their cases, which all had a solid wood back and no rear access cover.

All movements were equipped with round Illinois 11-jewel platforms (both Type A and B) until sometime late in 1927, when Sangamo made the decision to come out with a less expensive line of electrically wound clocks equipped with a round Illinois 7-jewel platform.  It must not have taken long for enterprising Jewelers to figure out that if they purchased the less expensive 7-jewel clock (which cost 1/2 of what an 11-jewel model did) and then replaced the 7-jewel platform with a 11-jewel platform, they could charge the 11-jewel sales price at a 7-jewel cost structure.  How long it took Sangamo to figure out what was going on is not clear, however, I would speculate that when spare parts sales of the 11-jewel platforms shot through the roof, it didn’t take long for them to realize the mistake they had made.

Luckily Sangamo was about to launch a totally redesigned movement (Type-L), which incorporated several improvements.

Using the above information we can now decode the Electrically Wound Tags.

On the tag below we can tell the following.

The tag shown below is identical to the one above except with one important difference.  Whenever the Style box is blank, the clock was either a specially manufactured model OR a conversion.  Sangamo advertised that they would convert any clock to an Electrically Wound movement and several examples of these factory conversions have been documented.  The specialty Early American Reproduction clocks (Old Salem, Ellsworth, Roxbury, etc.) do not have a style number.  Again, the NO. on the tag will always match the serial number on the front plate of the movement.

The two tags below are identical except for serial numbers and the Types, A-7 and B-7.  We have already established that Type-A clocks were time-only and Type-B are time and strike.  These tags were first used when Sangamo began using 7-jewel platforms, as a way to identify the platform on the movement.  In this case A-7 means that this is a time-only movement with a 7-jewel platform and B-7 a time and strike with a 7-jewel platform.  Another way to verify this information is the Style number.  In both of the tags the second digit of the style number is a “7”.  If the second digit of the Style number were a “0” or “1” the platform would be an 11-jewel model.  NOTE:  Because of the enterprising Jewelers discussed previously, you will sometimes find a clock marked as a 7-jewel, but find that it actually has an 11-jewel platform installed.  This is one where the Jeweler made a little extra money.

The tag below is a good example of why you should always pay close attention to all the data on the tag.  Using information discussed earlier we can tell that this clock is time and strike with an 11-jewel platform (B-11).  The 11-jewel platform is also verified by the Style number, as the 2nd digit is a “0”.  What you may not have noticed is that this clock was made to run on 110 VAC and “”25″” Cycles.  If you plug this clock into a normal 60 Cycle service the motor will NOT wind the mainspring.  In this case you will have to find a replacement 110 VAC, 60 Cycle motor.

The two tags below are examples of Hamilton-Sangamo tags.  Notice that the location of Lancaster, PENNA has been added to Springfield.  Because of this we can determine that this clock was made sometime between June of 1929 with the formation of the Hamilton-Sangamo Corporation and April of 1931 when Hamilton and Sangamo agreed to sell all clock operations to GTI.  We do not believe that any Electrically Wound clocks were made after that date, as no examples of Hamilton-Sangamo tags with just Springfield, ILL on them or Thomaston, CONN have ever been found.  Also note the “L” before each of the Serial Numbers.  The letter “L” in the serial number denotes that the movement is an L-Series, which was the last design with the new more powerful “C” type motor.  This is true for every Hamilton-Sangamo tagged clock, however, in cases where the “L” prefix is used on Sangamo Tags, some old design 2-motor movements have been found.